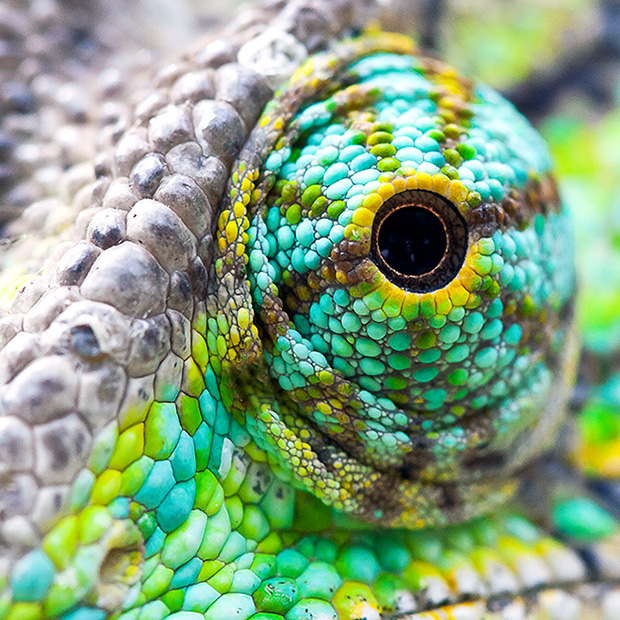 We are always talking about how amazing our eyes are! But have you ever stopped to think about how remarkable animals’ eyes can be?

Sight is important to us as human beings, but for animals in the wild, vision is a matter of life and death. And due to differences in environment, each species’ vision is different from the next!

Some Of The Animal Kingdom’s Most Fascinating Visual Systems

Some animals have really outdone themselves in the vision category! Here are some of our favorite animal eyes.

If you’ve ever seen a chameleon, maybe you’ve noticed that their eyes go in all sorts of different directions! A chameleon’s eyes have the ability to move independently of one another, allowing them to have a 360 degree field of vision.

Chameleons’ eyelids are also fused–they cover almost the entire eyeball except the pupil. These muscular, protective eyelids allow each eye to rotate nearly 180 degrees for an even wider range of vision!

The tarsier, a small primate, is known for its extremely large peepers. Even though its body is small, about the size of a squirrel, it has the largest eyes of any mammal relative to its body size. Each eyeball is about the same size as its brain. If humans had the same eye to body ratio as the tarsier, our eyes would be the size of grapefruits!

Similar to owls, the tarsier’s eyes don’t rotate in the eye socket. Because of this, they’ve developed the ability to rotate their necks 180 degrees!

Some of the most unusual animal eyes belong to the leaf tailed gecko. Instead of circular pupils like ours, their pupils are vertical with a series of pinholes that widen at night, allowing as much light as possible into the eye. These geckos have incredible night vision!

The leaf tailed gecko also doesn’t have eyelids. Because of this, they often have very detailed and intricate eye patterns that help to camouflage them. Since it can’t blink, they clean their eyes with their tongues! Can you imagine licking your eye every five minutes? Pretty crazy!

The award for the most complex visual system in the animal kingdom goes to the mantis shrimp. Where humans only have three types of color receptors, the mantis shrimp has 12! Along with color, their eyes can detect ultraviolet, infrared and polarized light. Like the chameleon, each eye has the ability to move independently and can rotate up to 70 degrees.

Just Remember, Our Eyes Are Great Too!

Of all the eyes in the animal kingdom, we think yours are the best! As remarkable as some of these animals’ eyes are, ours are equally fascinating. Because of them, we’re able to see picturesque sunsets and mountain ranges and every beautiful sight in between. As your eye care provider, we want to ensure you have healthy vision for a lifetime!